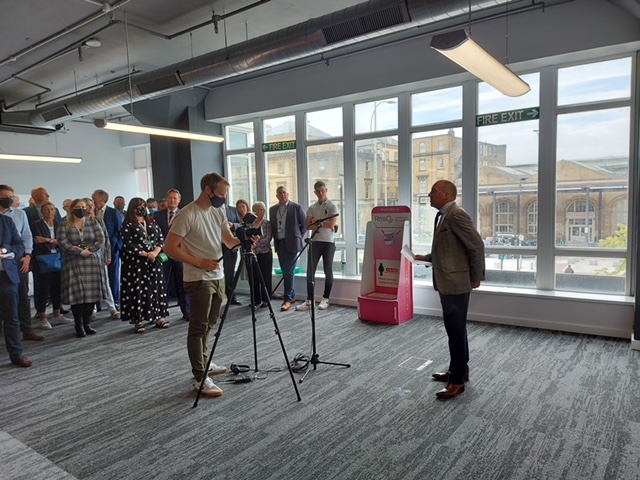 WHEN it comes to business success, I’ve always believed that the key for a fast growing business is not just knowing where you are going.

You should also remember where you came from.

As firms grow it is easy to focus purely on the destination but retaining a sense of identity is so important to future success too.

I hosted a live event yesterday, the first since March last year, which seems bonkers in itself.

That fact alone was enough to put a spring in my step as I walked through Hull city centre heading for the iconic former Hammonds department store.

The shop has a rich and eventful history.

H W Hammond opened a drapery shop on the old North Bridge in Hull in 1821 and the family business built a department store and restaurant in the city in 1916 but it was destroyed by German bombing in May 1941.

Within a week 47 of the shop’s departments reopened in a temporary location and the store was eventually rebuilt on Paragon Square, opposite the railway station in 1952.

It was bought by House of Fraser in 1972 and closed in 2019 after Mike Ashley’s Sports Direct acquired the stricken department store chain.

But what do you do with an empty department store in a city that has already seen the closure of Debenhams and Marks & Spencer and with the retail sector facing so many challenges?

Step forward ResQ, one of the fastest growing businesses, not just in Hull or Yorkshire, but I would argue in the whole of the UK

It is a contact and call centre business that works with major brands including Vodafone, uSwitch, ScottishPower, EE and Dixons Carphone.

It was founded 15 years ago by husband and wife team Nic Marshall and Gill Marchbank and Nic’s brother Matt.

They started with 12 desks for their call centre agents and they now employ almost 2,000 people.

Yesterday was the grand opening of ResQ at Hammonds of Hull.

They have taken over the whole of the first floor of the former department store (it used to be the ladieswear department if you are interested) where around 500 staff will be based as part of its growing partnership with mobile communications giant Vodafone.

My role was host of yesterday’s ceremony which of course was limited in numbers because of continuing restrictions due to Covid-19.

What was fantastic was the event was held on the floor of the call centre so we could see and hear the ResQ agents ringing bells when they recorded a sale and then spinning a wheel to claim a range of incentive benefits.

I welcomed guests who included the Lord Mayor of Kingston upon Hull Councillor Lynn Petrini as well as senior Vodafone executive, Jon Shaw.

I told the audience that as a business journalist I’ve spent my career telling stories about entrepreneurs and their companies.

And the great thing about business news, compared to other news, is that good news is actually more popular.

People want to hear about success stories, they want to learn how firms have thrived and grown.

Hull has a rich history of entrepreneurship and is home to some great companies.

And ResQ can certainly be included in that list.

As well as celebrating its 15th birthday this year, ResQ has been awarded with Best Companies’ highest accreditation – the coveted 3 Stars, meaning ResQ is a ‘world class company to work for’.

What I love is that when you talk to Gill, Nic and Matt and ask them what they put ResQ’s success down to, they all say the same thing: our fantastic employees.

They talk about how they have coped brilliantly despite the challenges faced, particularly in recent months.

They talk about their resilience, their tenacity and their hard work.

Nic underlined that in a short speech to guests and, as well as talking about the ambitions of the business he was also keen to talk about the support it had had over the years from many of the guests at the event.

Property entrepreneur Andy Allenby provided ResQ with its first premises while Shaun Watts of Chameleon Business Interiors and Neil Fisher of Airco have fitted out its premises.

With its cafe, breakout spaces and meeting rooms, ResQ’s new centre at Hammonds feels more like the base for a trendy digital and creative agency rather than a call centre.

In another nod to where the company has come from, Nic asked his Mum Janet to cut the ribbon to officially open the centre.

Janet and Nic’s Dad Mel have given the business a great deal of support over the years so it was lovely that they were there to celebrate this big occasion and this latest chapter in the ResQ success story.

Chatting to Janet before the event started, she told me that she had bought Nic’s pram from Hammonds when he was a baby.

That was a nice line to tell the audience, and given he is a burly former rugby player, I said I’m sure it was a very sturdy pram.

Gill and Nic also wanted me to welcome another special guest at the event who had been invited by their colleague Steve Thompson.

Norma Fellowes worked in Hammonds for 30 years, mainly in the cosmetics department on the ground floor.

She told me she started in the shop’s wig department as she was a former hairdresser.

I asked Norma for a bit of advice should I choose to don a wig.

Before the ribbon cutting ceremony Jon Shaw, head of consumer sales at Vodafone, said a few words and what impressed me most was that despite the company being valued at about £50bn, he thanked ResQ for “choosing us as a partner”.

He didn’t need to say that, but it meant a lot.

After the ceremony I chatted to Nic’s father Mel who told me he had been involved in the call centre sector in its infancy when he worked for a company that developed the first technology to count and monitor calls.

He said me that his job took him all over the world and he estimated that for a time he was one of the most travelled business people in the world.

I said I bet that earned him plenty of Air Miles.

Mel told me: “Do you know, with Qantas alone I had enough points to buy a grand piano.”

And there was me thinking a round trip to Newquay would be good.

NOT only did I compere a live event this week, but I also attended my first live sporting event in God knows how long.

Thanks to an invitation from Roger Hutton, chairman of Yorkshire County Cricket Club, I found myself in the Emerald Suite at Headingley Stadium for Yorkshire Vikings’ Vitality Blast match against Worcestershire Rapids.

The match was exciting with Yorkshire winning thanks to a crescendo of sixes in the final overs and some nice tight bowling.

The company was even better.

Roger, who is joint managing partner of law firm Clarion, is great company and probably the first ever chairman of YCCC to wear a pair of jeans to a match.

If cricket clubs are to thrive they need to look at new approaches and build wider relationships across the community and I know that is something Roger is passionate about doing.

The guests at Wednesday’s match were influential figures in the business community who also happened to be very good company too.

Stuart Cottee is senior partner for Deloitte in Yorkshire and the North East, Pervinder Kaur is the new head of law firm Addleshaw Goddard’s Leeds office while John Hamer is a corporate partner at law firm Walker Morris and Jonny Marston is the managing director of global restructuring and professional services firm Alvarez and Marsal’s Leeds office.

Already slightly giddy from being able to attend a sporting event, I was excited to bump into some old contacts and to make some new ones as well as enjoying a pint of Tetley’s and some Yorkshire Tapas.

Andy Dawson is commercial director at YCCC and it was good to hear that bookings for events, particularly in the wonderful Emerald Suite, are going really well.

I first met Yaseen Mohammed when we went to property conference MIPIM as part of Bradford’s delegation.

He has since left Bradford Council and is now a consultant working with public and private organisations in the property sector and, importantly getting them to understand each other better.

Yas introduced me to a couple of interesting guests he was with and I was swathed in a really positive vibe as I made my way to my seat to watch the match.

As I sat down I heard banging on the glass floor to ceiling windows of the Emerald Suite behind me.

It was umpiring legend Dickie Bird.

Not waving hello, just telling me to move and stop spoiling his view of the pitch.

He’s now 88-years-old but even in his umpiring prime I don’t think Dickie would have used more energy to dismiss a batsman refusing to walk.

Have a great weekend. 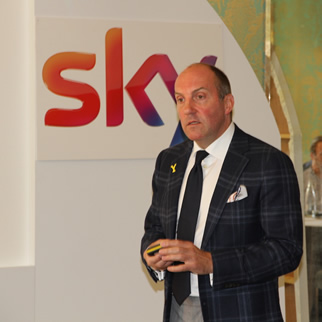 David is an award-winning journalist and communications expert with high level connections across senior leaders in the private and public sector.

No matter what your needs are we can deliver anything from a simple content plan to a full-blown marketing strategy.